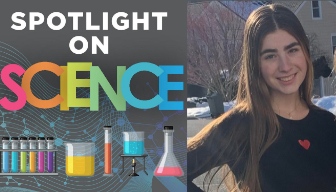 There are many treatment options for those battling addiction, including therapy, sobriety meetings and rehabilitation. There even are virtual addiction-treatment programs, through which people can tackle their addiction from the comfort of their own home. But how effective are these types of treatment? Dylan Sadow pondered this question for her Science Research Program project.

With the help of her mentors, Sadow, a junior, analyzed raw data from a past study of virtual addiction-treatment programs. She used information known as Fisher’s exact tests and Pearson’s correlations, both of which compare the relationship between two variables.

﻿“I received the raw data from a study conducted by lead researcher (named) Nunes in 2012,” said Sadow. “In this past research, a virtual treatment called the Therapeutic Education System was analyzed. This treatment was composed of different virtual modules.”

Sadow hypothesized that the more modules a person completes, the more likely he or she is to reduce their drug usage. She sought to determine if there were a correlation between completed modules and negative urine toxicology screenings.

Sadow’s Science Research Program experience developed skills she plans to use in college and beyond.

“Science Research has taught me to become a more critical thinker, create eye-catching presentations, conduct data analysis and unravel complex texts,” Sadow said. “Further, the responsibilities of creating formal emails and reporting to a researcher have been invaluable learning experiences.”

Sadow plans a career in medicine, though she’s open to other options as well. Either way, she knows the Science Research Program will help her achieve goals.

“Even if I veer on another path,” she said, “I have no doubt that my time in Science Research will help me with whatever I decide to do.”